Various documents from the family archive

1. Airplane Insensitive To The Action Of Gravity 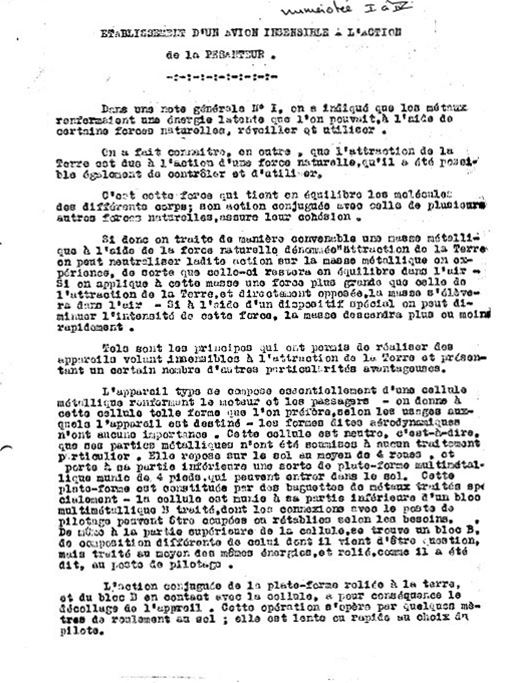 PRODUCTION OF AN AIRPLANE INSENSITIVE TO THE ACTION OF GRAVITY

In a previous note I have indicated that metals enclose a latent energy which can, with the aid of certain natural forces, be awakened and utilized.

I make it known furthermore, that the attraction of the earth is due to the action of a certain natural force which it has been possible equally to control and utilize.

This is the force that keeps in equilibrium the molecules of different bodies. Its action along with that of many other natural forces assures their cohesion.

If therefore a metallic mass is treated in a suitable manner with the aid of the natural force which we will call “attraction of the earth”, it is possible to neutralize the above mentioned action which the metallic mass experiences, in such a manner that the mass rests in equilibrium in the air. If one applies to said mass a force greater than the attraction of the earth in the opposite direction, the mass will rise in the air. If by means of a special apparatus one diminishes the intensity of said force, the mass will descend more or less rapidly.

Such are the principles which allow the realization of a flying device insensible to the action of the earth and also presents certain number of other advantages.

The apparatus is composed essentially of a closed metallic capsule containing a motor and passengers. The capsule can have any convenient shape, according to the use for which it is required. The form does not have to be aerodynamic, this is of no importance. This capsule is neutral, that is to say the metallic parts of it are not subject to particular treatment. It rests on the ground by means of four wheels and has on the lower part a type of multi-metallic platform carrying four feet which can enter into the ground. The platform is made of metallic strips, specially treated. The capsule is equipped, at its lower part with a treated multi-metallic block B, which has connections to the pilot’s controls which can be made or broken as required. Similarly in the upper part of the capsule is placed another block B’, which has a different composition to the other, but is treated with the same energies. It is connected to the pilot’s controls which can be made or broken as required.

The conjugate action of the platform connected to earth and the block B in contact with the capsule cause the apparatus to lift-off . This operation is assisted by rolling a few meters along the ground. It is slow or rapid depending on the choice of the pilot. 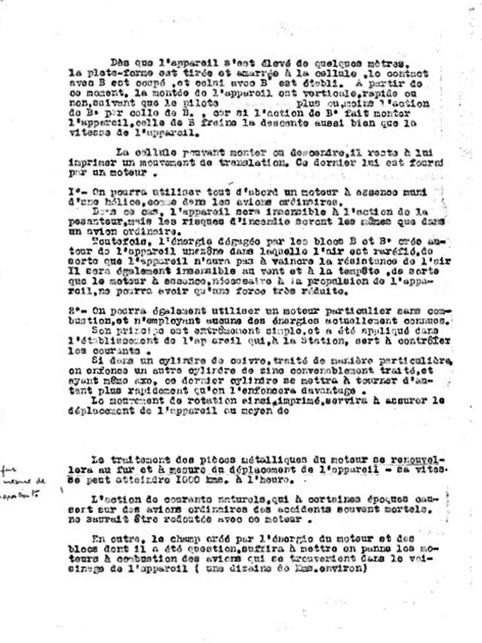 The capsule can rise or fall, but it still requires a means of producing forward motion. This is done by a motor.

Nevertheless the energy liberated by blocks B and B’ create about the apparatus a zone in which the air is rarefied, such that the apparatus will not have to act against air resistance. It will be equally insensitive to wind or storms so that the petrol engine used can be of very much reduced power.

If in a cylinder of copper treated in a special way and enclosing another cylinder of zinc, treated in a special way and mounted on the same axis, the latter cylinder will be caused to revolve more or less rapidly depending on the depth of penetration of one cylinder within the other. The rotation movement furthermore will serve to assure the movement of the apparatus by means of ……….. [this part is missing from the originals text]

The treatment of the metallic pieces of the motor is renewed in proportion to the travel of the apparatus, the speed could be as much as 1000Km per hour.

The action of natural currents, which at certain times cause often fatal accidents on ordinary aircraft, cannot be feared with this engine.

In addition, the field created by the energy of the engine and the blocks in question, will be enough to put out the combustion engines of the planes which would be in the vicinity of the device (about ten kms). 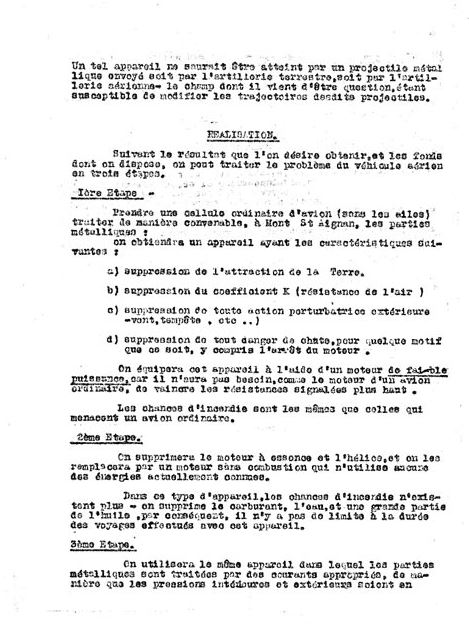 Such a device could not be reached by a metallic projectile sent either by the ground artillery, or by the air artillery M the field in question being likely to modify the trajectories of the said projectiles.

Depending on the desired result, and the funds available, the aerial vehicle problem can be handled in three steps.
1st step

Take an ordinary airplane cell (without the wings) suitably treated, at Mont St Aignan, the metal parts: we will obtain an aircraft with the following characteristics:

This device will be equipped with a low-power engine, because it will not need, like the engine of an ordinary airplane, to overcome the resistances mentioned above.
The chances of fire are the same that threaten an ordinary aircraft.

The gasoline engine and the propeller will be eliminated and replaced by a combustion-free engine that does not use any of the currently known energies.
In this type of device, the chances of fire no longer exist - the fuel, the water, and a large part of the oil are eliminated, therefore, there is no limit to the duration of the trips taken with this device.

The same device will be used in which the metal parts are treated by appropriate currents, so that the internal and external pressures are in equilibrium at all times - This device can therefore move in the stratosphere - the pilot and the passengers will be protected against the physiological dangers of high altitudes, by metal cages treated accordingly. 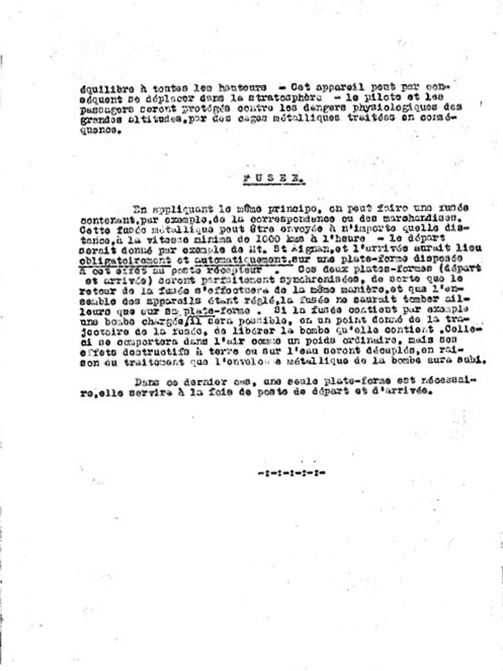 By applying the same principle, one can make a rocket containing, for example, correspondence or goods. This metal rocket can be sent at any distance, at the minimum speed of 1000 km per hour - the departure would be given for example from Mt St Aignan, and the arrival would take place obligatorily and automatically on a platform arranged for this purpose at the receiving station. These two platforms (departure and arrival) will be perfectly synchronized, so that the return of the rocket will take place in the same way, and that all the devices being set, the rocket cannot fall anywhere other than on the platform. . If the rocket contains, for example, a loaded bomb, it will be possible at a given point in the rocket's trajectory to release the bomb it contains. This will behave in the air like an ordinary weight, but its destructive effects on land or on water will be increased tenfold, due to the treatment that the metallic envelope of the bomb will have undergone.

In the latter case, only one platform is necessary, it will serve both as a departure and arrival station.