Is the Universal Current a Zenneck Wave?

What is Rota’s Universal Current in modern terms? The problem has to be divided into two distinct parts:

It is proposed here that the most likely candidate for Rota’s Universal Current itself is the Zenneck Surface Wave. 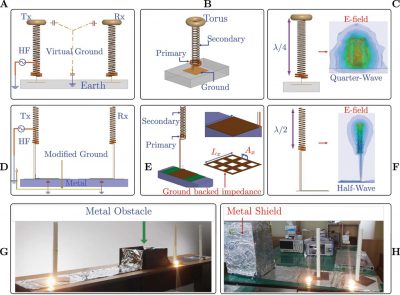 Along with others, around 1906 J. Zenneck was attempting to explain how radio transmission could curver round the earth as was shown by Marconi’s early radio transmissions across the Atlantic. Various theories were around at the time one of which was Zenneck’s surface wave [1] which was shortly after formalised by Sommerfeld [2].

The Zenneck surface wave is an electromagnetic wave which is conducted in the earth and along the earth-air boundary. It is not the same as the common radio frequency ground wave produced by the usual antenna configurations. To get a feel for its properties:

The distinguishing feature of the Zenneck wave is the propagating energy does not spread like radiation, but is concentrated near the guiding surface. Zenneck conceived that the earth's surface would perform in a manner similar to a single conducting wire and Sommerfeld had shown that an electromagnetic wave could be guided along a wire of finite conductivity.

It's interesting to note that Sommerfeld made a point of distinguishing between the "electrodynamic" surface wave and its Hertzian counterpart the space wave, believing that both components could be present in varying proportion in the wave complex. It was Tesla's assertion that the exact composition of the emissions was dependent upon the design of the transmitter.

". . . the mathematical treatise of A. Sommerfeld,… shows that my theory is correct, that I was right in my explanations of the phenomena . . . ."

The paper, "Uber die Ausbreitlung der Wellen in der drahtlosen Telegraphie,"[3]  contained a formal analytical solution for the radiation from a short vertical monopole over a finitely conducting ground, and was written within the context of Zenneck's 1907 formulation. It posits, two contrasting concepts which may be designated by the terms 'space waves' and 'surface waves.' The Hertzian electrodynamic waves are [space waves]. Electrodynamic waves on wires are typical surface waves.

The losses shown in the propagation of the Zenneck wave increase after about 30 kHz, so its usefulness, for the purposes of this discussion, are in the low frequency (LF) to the Extra low frequency (ELF) bands.

"The apparatus shown in Figs. 8 and 9 is especially suitable for signifying the presence of a magnetic body which may be upon or in the water… and this body we admit may be a submarine. Page 3 Claims 50,55 states: The idea will certainly occur that it is impossible to transmit through sea as it is true that sea water absorbs very rapidly electric waves but it must be remembered that the known electric waves are simply a disturbance of the magnetic lines of force instead of as we obtain in the present invention the production of real electric current. For this reason the absorption over a greater part of its travel and its production is dynamically stronger and more united. The wave therefore has the faculty of being perceived by the perception apparatus, being signaled at the receiving station with very delicate apparatus, that is to say by means of a telephone of the micro-ampere type… or by means of a galvanometer….for example the Deprez-D’Arsonval."

We know from Rota’s notes that he determined almost everything by experiment. When this patent was written he was working for the British Government’s National Physical Laboratory , Teddington UK . This patent tells us some interesting facts:-

Finally, regarding this patent there are several incomprehensible claims in it, passing over whether cylinders could be made to amplify any electromagnetic wave, the other claim Page 2 claim 15

“The battery ( elsewhere: battery, accumulator or dynamo) has as its object to reconstitute all the forces lost by passive losses, resistances and otherwise, and further to give to the energy of the wave its constitutive and primitive property”.

“The cylinders increase the capacity and diminish the resistance and in union with the relative inductions and currents of the batteries they define the energy of the wave with intensity and phase desired and determined”.

This is not possible with the information given in the patent. For the direct battery current to act on the radio frequency picked up by the antenna cylinders, some form of non-linear component or a thermionic tube amplifier is needed which is not present in the patent.

Today we are well aware that solar activity via perturbation of the earth’s magnetic field induces telluric currents in the earth. Rota’s use of these currents flowing through the sea again suggests VLF Zenneck waves, generated as a result of solar activity, of course huge magnetic disturbances will produce a mixture of electrodynamic fields and currents, some in the earth and some as VLF hertzian electromagnetic waves. Rota’s deeply buried antenna specifically detected deep earth current fluctuations.

The second problem: How does the Universal Current activate metals?

There is no physical evidence of low frequency electromagnetic fields producing decomposition of metals at the atomic level, where, according to Rota the “latent energy of the metal is released”

It is possible that Rota was wrong and some other process was at work. The main evidence for the veracity of Rota’s claims are probably those of Dr. Kresser. Kresser challenged Rota to tell him what was wrong with a number of patients without any prior information. Apparently, Rota was completely successful. The essential point is that Rota used his sets of activated metals to do diagnosis, listening for reactions between the universal current active in the patient against those of the metals. Kresser seemed to have used the method himself using Rota’s apparatus but makes no comment on what the currents sounded like.

The nub of the problem is simply that if Rota is right electromagnetic energy can activate the atomic structure of matter causing it to release energy even after the stimulus is removed. Furthermore, if the universal currents are electromagnetism then they conform to Maxwell’s equations, but must have an additional parameter which is the source of their power to awaken the latent energy of matter. There is no evidence that electromagnetic fields artificially generated in the usual way have this effect.