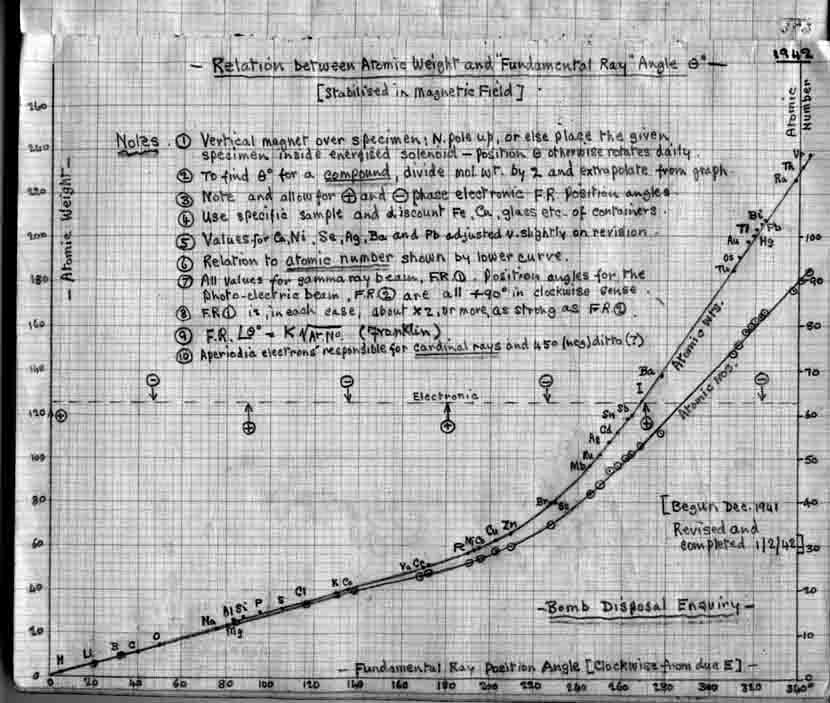 (From the “Bomb Disposal Enquiry”.  At this stage they were employed by the British Government to explore the possibility of using their methods to find unexploded bombs. See Passive “Radar”… below)

In 1971 I was offered and accepted the research papers of J.Cecil Maby. Here is an outline of some research which seems to have a direct bearing on Rota's work. The bulk of the work was done mostly between the first and the early part of the second world war. Neither Maby of Franklin knew anything of Louis Rota, which is not surprising bearing in mind the secrecy with which Rota surrounded his research between the wars. Maby and Franklin, like Rota, found all metals, in fact, all elements emit beams which radiate in the horizontal plane, in specific directions and even electromagnetic frequencies also emit in specific horizontal directions! This throws light on some of Rota’s claims.

Franklin and Maby found that these directional beams rotate every 24 hour through 360 degrees. Maby found that if a magnet is placed under/over the element under test then the angle remains fixed. The N or S poles rotate the direction of the whole set by 180 degrees. The earth’s vertical magnetic field is not quite strong enough to fix the direction, so a mixture of fixed and static beams is produced if a magnet is not present. Here is Maby’s graph of what he calls the "fundamental ray" angle versus atomic weight/number:- 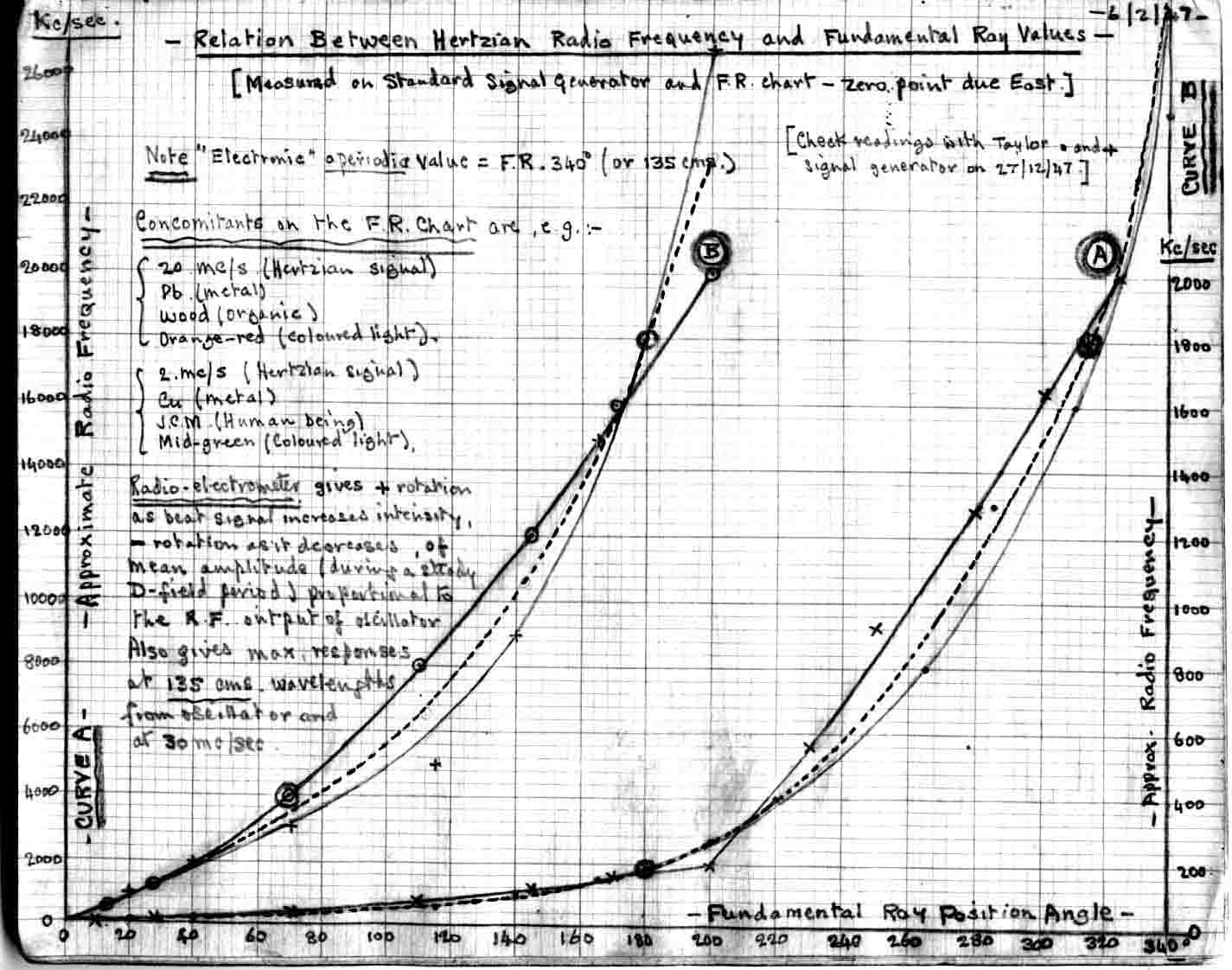 In the late 1920's early 1930's T. Bedford Franklin found that the presence of deeply buried ore bodies produced a disturbance in the field strength of an early experimental medium wave broadcast station recently established in the UK at Daventry. He found that despite the scientific view that such signals could not penetrate several hundred feet underground to the ore body, the field induced in the ore body was detectable on the earth's surface and interfered with the directly received signal from the radio station causing a variation in phase and amplitude which was detectable with a suitable radio receiver and frame antenna. He set up a successful business finding ore lodes for mining companies being able to detect the depth and size of the lode with reasonable accuracy.

The surface field patterns were very similar to diffraction patterns familiar in optics, so it was assumed that the same process was at work with radio wave patterns detected on the earth's surface.

Around the early 1930's, J. Cecil Maby found he could successfully dowse using a forked rod and when he later heard about Franklin's work and met Franklin, he tried dowsing a site which Franklin had previously tested with his frame antenna and radio apparatus. Maby was amazed to find that he could detect with the dowsing rod similar field patterns to those which Franklin had found instrumentally. Franklin was able to stimulate an ore body in dry rock at considerable depth using a 30 meters radio transmitter despite the popular view that such frequencies could not penetrate that deep.

Maby found that an iron rod stuck in the ground would radiate beams almost N,E,S,W without any external excitation and they tried various radio receivers to detect these beams instrumentally finally using a super-regenerative receiver. Franklin had a theory that very deep ore bodies were being shock excited by penetrating cosmic rays because the depth was frequently too great for radio waves to penetrate from the surface. This idea was generalized into the theory that a dowser was picking up radio signals originating from cosmic ray shock excitation of a buried object or ore body etc. Instrumental detection was very difficult although the signal was clear enough to a dowser.

A Passive "Radar" or Aircraft Detector

In about 1939 before the outbreak or the war they contacted the British Government about their aircraft detector which the called the "Fraby detector". Professor Andrade, in charge of finding new inventions to help the war effort, sent two scientists to investigate and after several months of tests they produced a favourable report. Development continued until suddenly the Government lost interest.

After the war, this seemed to coincide with development of centimetric radar.

Franklin independently checked Maby's findings presumably using his own dowser but he also used his own ionisation counter. They found that element such as iron copper tin etc all have a characteristic wavelength in centimetres which Franklin working on an analogue with x ray diffraction found was 2k√(atomic weight x atomic number) The value of k was about 1. This field was detectable with the ionisation counter as well as by dowsing means.

The extraordinary effect on radioactive bodies

Maby and Franklin published most of this work up to 1939 and a compilation in 1966.